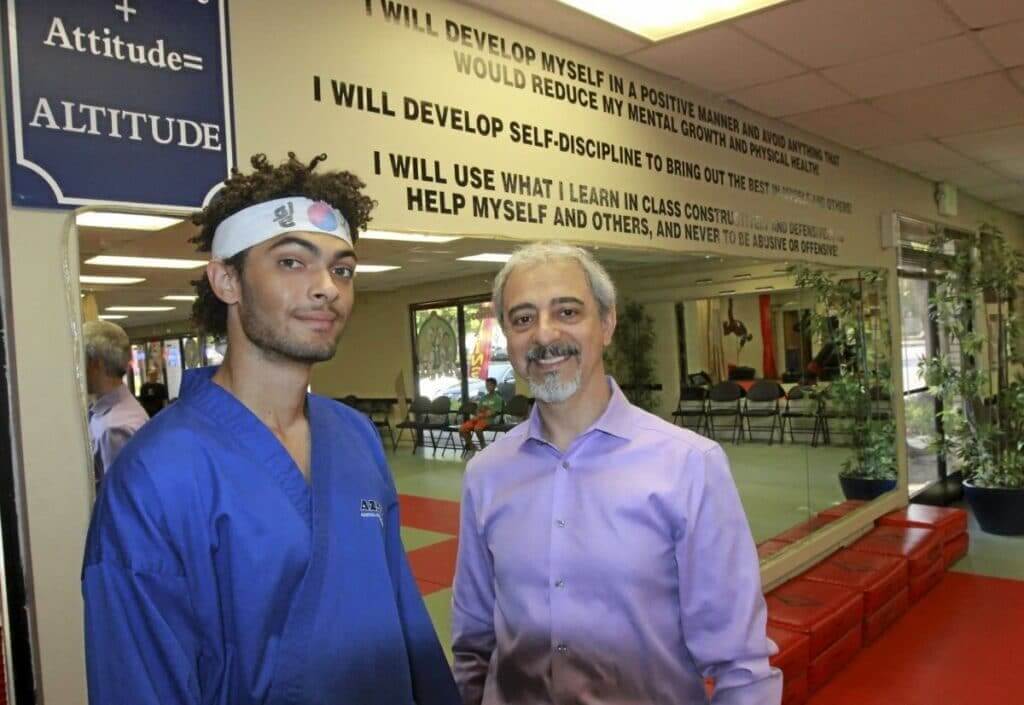 Chico >> Michael Ajamu wasn’t in serious trouble, but he was headed that way. Now 16, he looks back on a time when he got straight Fs in school, hung out with other apathetic teens, was rude to his mom and broke things.

“I was just unmotivated, and I had friends who were like that, too. I was not interested in doing good,” Ajamu said.

While attending Fair View High School, where he is about to start his senior year, he heard about Rock Solid Teens. The program at Azad’s Martial Arts Family Center is about changing behavior, but it’s also about choosing a different attitude.

“Michael was doing nothing right. Now he is doing so well, he’s my front desk person. He has integrity,” said Farshad Azad, owner of the center and a martial artist for over 35 years. He is a 10th Degree Black Belt in Shaolin Tai Chi Chuan, the Grandmaster and Founder of Jongshindo, and 9th Degree Black Belt in Sinmoo Hapkido. Rock Solid Teens is his brainchild.
An RST team meeting the council members and sitting in the seats of elected officials to experience leadership roles 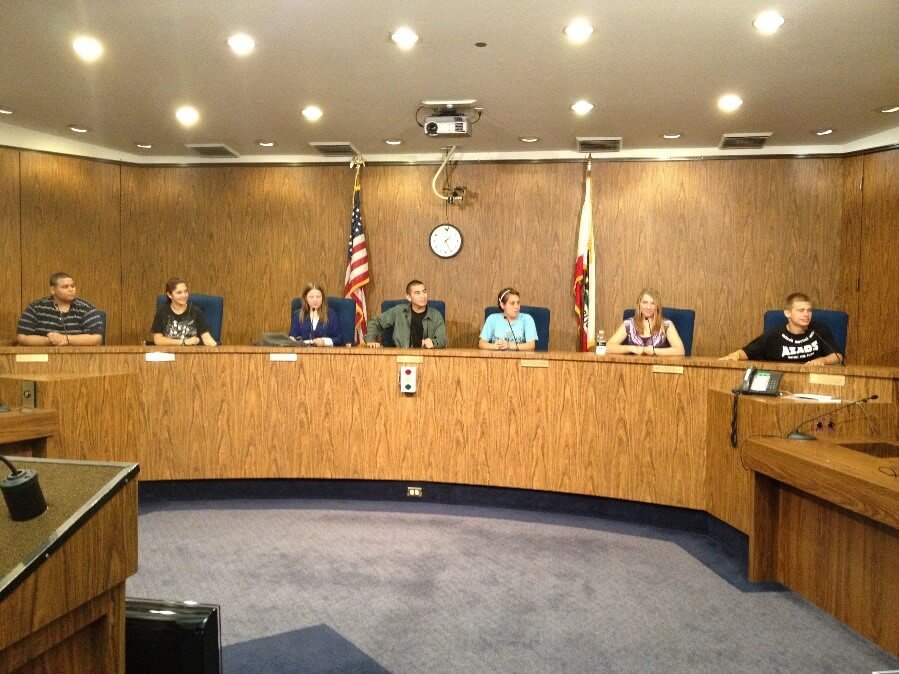 “Teens can get past challenges and hurts and move on. This program is making a point, it wakes kids up. It’s a lot of work, but I see that kids completely change their focus.”

Ajamu said the consistency of Rock Solid Teens has worked for him. “It’s five days a week. I started coming here [Azad’s Martial Arts Center] in December 2014 and I’m still in it. You work on the physical, mental and spiritual and find a better focus.” 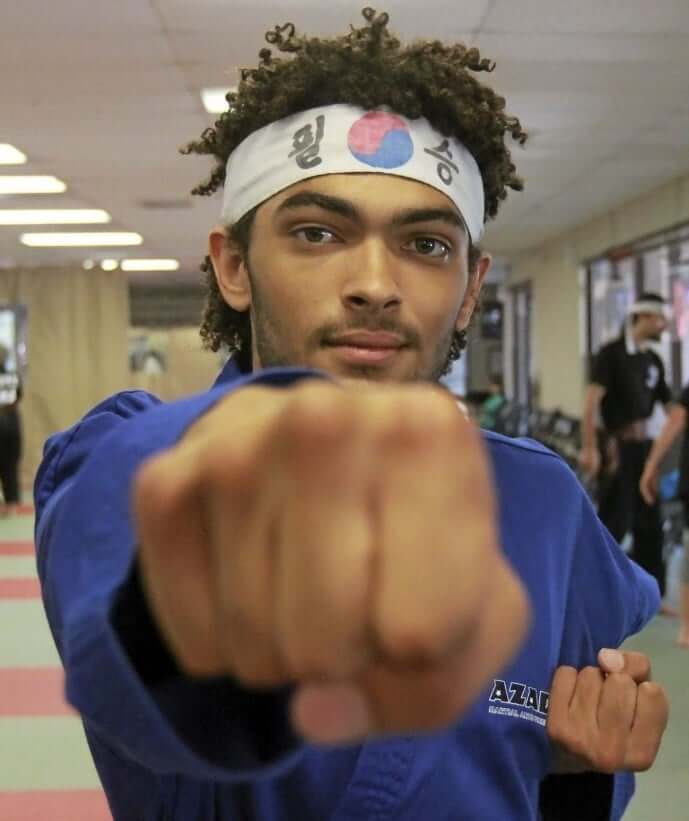 Ajamu’s mother, Anika Ajamu, said Azad and Rock Solid Teens made a huge difference for her son. “Michael was in trouble, and I really didn’t know what to do. His dad is not around. He was very close to my mother, but she died and that set him off. He was angry and upset. Rock Solid gave Michael direction, and Azad is a father figure to so many of the kids. I couldn’t believe it when he brought home a report card with As and Bs.”

Azad said Ajamu’s success is not unusual. “Michael is a great example that you can change your attitude when you change your perspective, and your thinking [process].”

Azad explained how Rock Solid Teens works. “First, the student must show a dramatic change in school. He must apply himself; we have no time for losers. I must receive letters of recommendation from teachers, counselors, principals. And parents or guardians convey to me if [student’s] behavior at home is improving.”
The key to the program’s success, says Azad, is teens must feel that changes are their own decision. “In the background, we have a chain of daily emails to direct the kid in the right direction,” said Azad.
Earlier this summer, Azad traveled to Rio de Janeiro, Brazil, but it wasn’t a vacation. Azad was on a mission to share his Rock Solid Teens program with kids living in poverty there.

“In Brazil, my goal is to reach kids at an emotional level so they understand changing their thinking and their vision from negative to positive,” he said. “The number one purpose for me was to connect with kids in slums.”

It’s important, he said, because “a million people live in slums in Re de Janeiro. The dichotomy of economic and class separation is really heavy. On the Copacabana, there are $10 million apartments and at the same sight in the hills, there are hundreds of thousands of slums. There is hardly any sanitation or water. Some have buckets or barrels on their roofs to funnel rain water into their houses.”

Azad said the slums are substandard dwellings built on top of each other, right next to each other. “It’s hard to get in, the corridors are so small. It’s a maze forever. It’s also very dangerous. The poverty is high, so the violence is high. 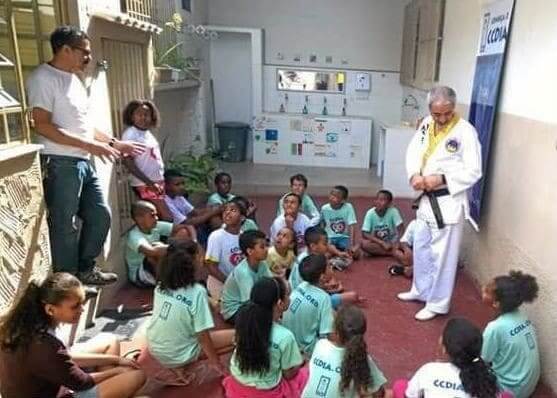 “There are lots of kids — some have parents, some have guardians. Some are alone. There are 8-year-old homeless kids living in cardboard boxes.”He met children and teens there, and said the often live with horrific abuse. Those left with no choices often end up unable to control their emotions, he said, adding he sees that in the U.S., too.
“A lot of kids at risk are in difficult places. They just don’t know how to manage emotions. They’re too angry, too sad, make poor decisions and there is violence.”
Before he went to Brazil, Azad became acquainted with Centro de Cooperacao Para O Desenvolvimento da Infancia e Adolescencia. Known as CCDIA, a nongovernmental, nonprofit group that works to help at-risk youth.
It is a school that also provides an after-school program, tutoring, breakfast and lunch, and staples such as clothing. It relies on funding from philanthropic groups and Azad said it is respected in Brazil.
CCDIA asked Azad to share his ideas with youth, ages 6 to 17, who live in the slums.
“While I was there, I probably talked to 40 kids. At first, it was a shock the way I spoke to them about taking charge and impacting their own lives, with visions of the future. But the wheels were turning in their minds.
“This particular school does a lot in that area, but nothing like we do. Afterwards you could see the kids thinking about it, how things could be different. It was a paradigm shift for them to be thinking of being out of an overcrowded, dangerous slum. I challenged their thinking.” 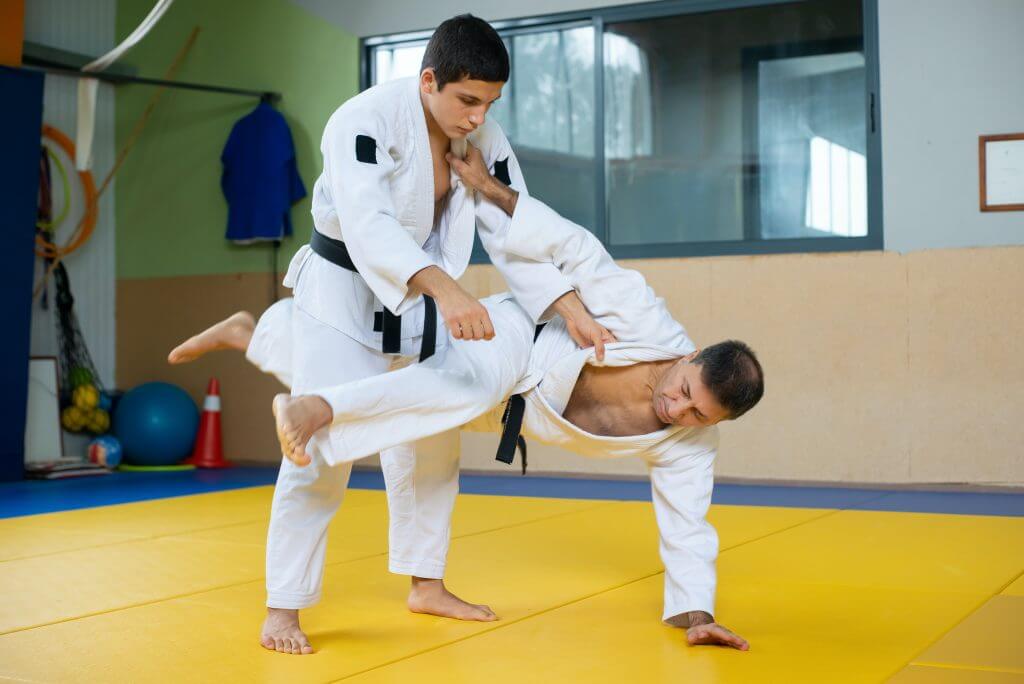 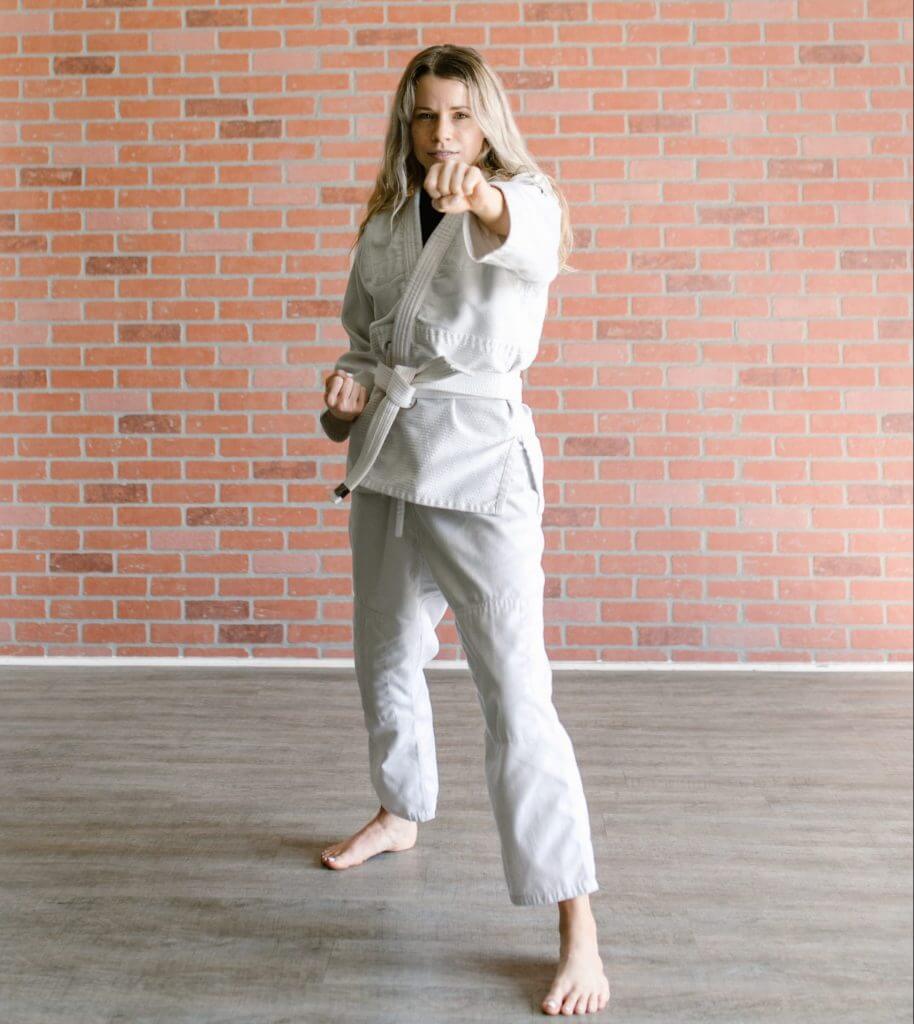 Azad said children in a slum often stay there because “they know nothing else. I painted new picture in front of them, and that is they can change everything. They can see an idea, a vision, and look outside of gangs, drugs and violence.”
“Every single one came and hugged me and shared their feelings about it,” he said.

The future
Azad said a handful of his Rock Solid Teen students, including Ajamu, will visit Rio de Janeiro next year. “They are my most successful students. They will live with families and be the example of success. It will also be an opportunity for kids there to see that people have problems all over the world, not just in Rio. The teens from Chico will see they are pretty lucky to live here,” he said.

“The program in Rio is now our sister program. We want to do this in different countries, make it international.”

WE TAKE CARE OF PLANNING AN UNFORGETTABLE BIRTHDAY PARTY FOR YOUR CHILD! 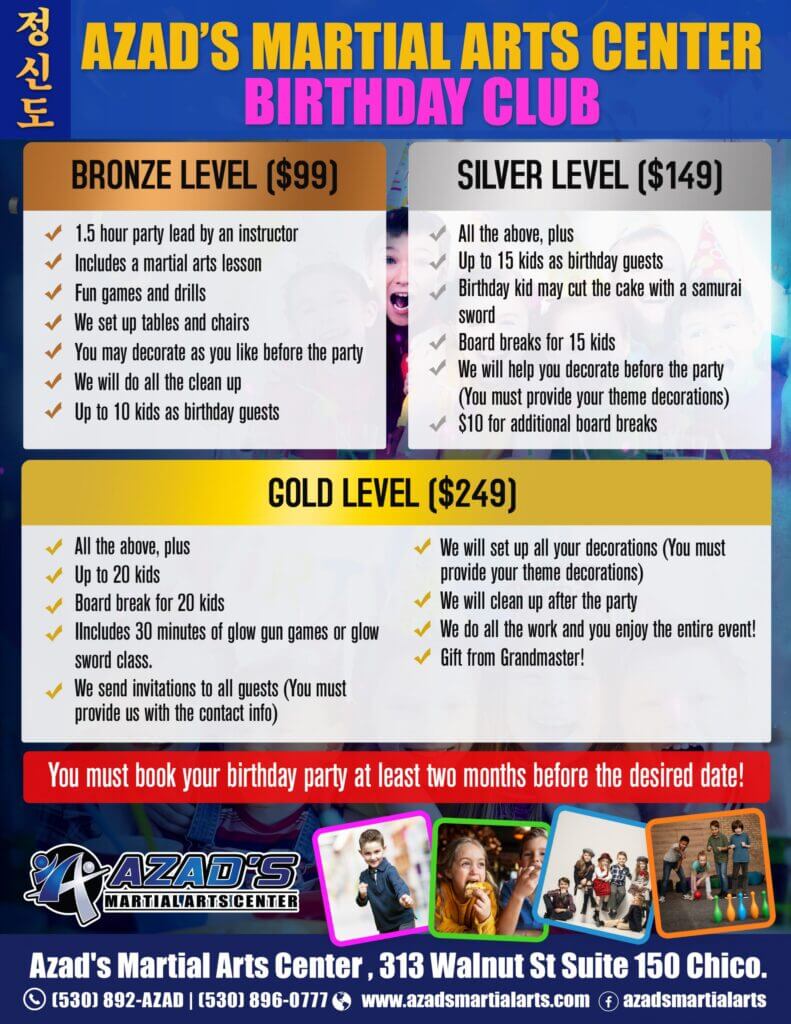 WE TAKE CARE OF PLANNING AN UNFORGETTABLE BIRTHDAY PARTY FOR YOUR CHILD!

SECURE YOUR SPOT IN AN UPCOMING BEGINNER CLASS